Nic in her painting pyjamas 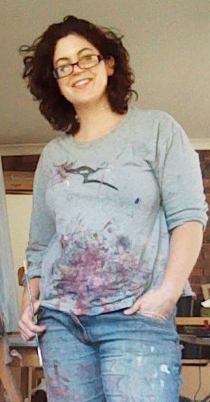 Nic Kirkman is an emerging artist and creativity coach. While art’s been a hobby/talent from the age of 4, she waited until nearly 40 before really believing this could be her work, and committing to it in Jan 2014. She is originally from Yorkshire, but has been in Australia since 2012 and loves it here.

In her previous lives (back in the old country) she had been a Physicist, University Tutor (teaching study skills to Dyslexic and Dyspraxic students), and (before realising that art is a real job) had returned to University to study Architecture. While that last bit didn’t go so well, it did set her up for a career in art and helping others on their creative journeys, especially if it involves overcoming perfectionism. Now, she’s very involved at Peninsula Arts Society, where she teaches, learns, and has had a stint on the committee and as their newsletter editor.

She has many catchphrases and silly voices, believing that’s the best way to get serious work under pomposity’s radar. Both her art-work and her coaching is all about joy and making increasingly better mental health choices (with the possible exception of her own collecting and hoarding of art materials). Nic owes much gratitude to her friends, students and former teachers for their support and wisdom. A special thank you to both Catherine Hamilton and Marilyn Richards.

Adventures in colouring in XD